Canada’s Rayleigh present some of the most furiously heavy screamo you’re likely going to hear in awhile on their Last Word EP, available now via Zegema Beach Records. Get an exclusive listen to the album below — be prepared for a furious storm of intense metallic textures where quite simply, the chaos at times feels like the endgame in a beautiful elevation of despondent energy. The four tracks sound like they have captured a moment of mental collapse. Listening through the work, there’s a clear, overwhelming sense of getting pushed right to and even held over the edge of an only barely metaphorical cliff.

The particular road various underground outfits along these lines take to their own particular edges is always noteworthy and fills in a lot of the color of the work, which doesn’t just constitute walls of noise (although those work too sometimes). Rayleigh’s particular brand of chaotic screamo as presented on Last Word is visceral and bone-rattling, not necessarily itself seeking to create a feeling of despondent rage as much as it seems bent on progressing the intensity towards a flourishing conclusion. The chaos is here to stay — Rayleigh’s music constitutes an apparent sonic attempt to grip the mayhem, as perpetual of an effort as that may be.

They kick off Last Word with somewhat of a harsh noise intro, which jumps to an undercurrent that runs throughout the record, which has plenty of screeching distortion. They have a significant sonic palette to draw from in building atop that thread, though, like via the almost black metal-esque fury on their second track, “Last Mechanical Art.” There aren’t many artists out there taking screamo to such fascinating and thrilling extremes — it’s reminiscent of work from California’s Outlier, although they maintain more of an explicitly “sad” sheen to their music, dealing with pools of emotion. While remaining wonderfully distinct, it also calls the heaviness of Wristmeetrazor to mind, who also take their music to particularly vicious extremes.

“Sun Stealer” introduces some jazzy technicality that in the context of the first two tracks at least, comes as a welcome — and potent — surprise. The texture has been thoroughly enveloped into the broader furious stew, and it hits with some intriguing force. It’s a new direction, not a break.

The EP’s closer — “Diamondback” — brings Rayleigh’s threads together in a glorious and perfectly fitting finale. This particular tune takes a more explicitly melodic but no less crushing direction, remarkably personifying a poignant, pure desperation in sonic form. The music is nightmarish, but in a good way.

Check out each track of the EP below. Information on obtaining the release follows the links.

Zegema Beach Records is offering 50 physical copies of the EP, which will be the final release from the project. Members now play in bands including Obroa-Skai — which really ups that harsh noise influence — and Parliament of Nerves. In the U.S., get your hands on the material right here, and in Canada and elsewhere around the world, go to this link.

Check out what you can get: 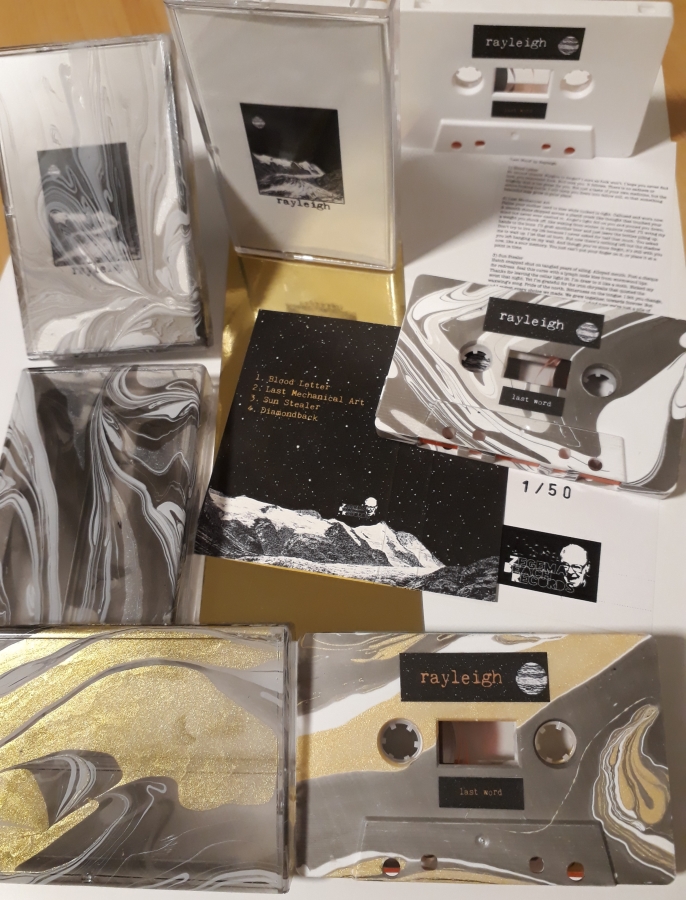