Yianna Bekris presents songs for a broken world on her new solo release as Vouna, for which she crafted the entirety of the music. Both sonically and thematically the now available self-titled record feels huge in scope, pushing a monumental creeping iceberg of a funeral doom sound and scoping the wounds present and past humanity have ripped open in the earth along the way. Without the earth, we wouldn’t be here, and these wounds aren’t without consequence — charging up the drive behind the record.

Conceptually, Bekris carved a place for her newest music in the middle of the ever approaching post-apocalyptic wasteland enacted by climate change. That wasteland is now imminent, as areas in California and beyond burn and increasing numbers of people are left dead or homeless in the face of an increasingly dried and heated environment. These disasters have long emerged from the realm of projections and begun making their mark.

Bekris explains: “The first real, complete song I wrote was ‘Drowning City’ which I wrote while living and working in old growth forests in the Cascades of central Oregon in the summer of 2013. This was when I first started working doing forest ecology research and learning about climate change and its future impacts on the planet in a more in depth manner. That year we also reached 400 ppm atmospheric carbon dioxide for the first time in recorded history. I started paying attention to climate change’s effects on the forest.”

Each of us maintain unique (and human) vantage points, although climate change continues dragging the ground out from under us as we fall into its version of the future all the same. Still, there’s a lot of that future’s color left to be filled in — and that’s where we (and more particularly, Vouna) come in.

“I am in the mountains a lot so you could say I am used to seeing epic landscapes,” Bekris says. “I started visualizing this post-apocalyptic landscape, though sometimes I don’t need much help due to forest fires and logging.  I speculated, maybe in the case of a post-apocalyptic world, I would seek refuge in the mountains. Around here the mountains are where the wildlands are. They are impractical for establishing large cities; they are colder. Maybe in a warmer world they would be more hospitable for humans, maybe they would be the only place close to me that was tolerable.  This is also why I named the project ‘Vouna’ — which means mountains in modern Greek.” 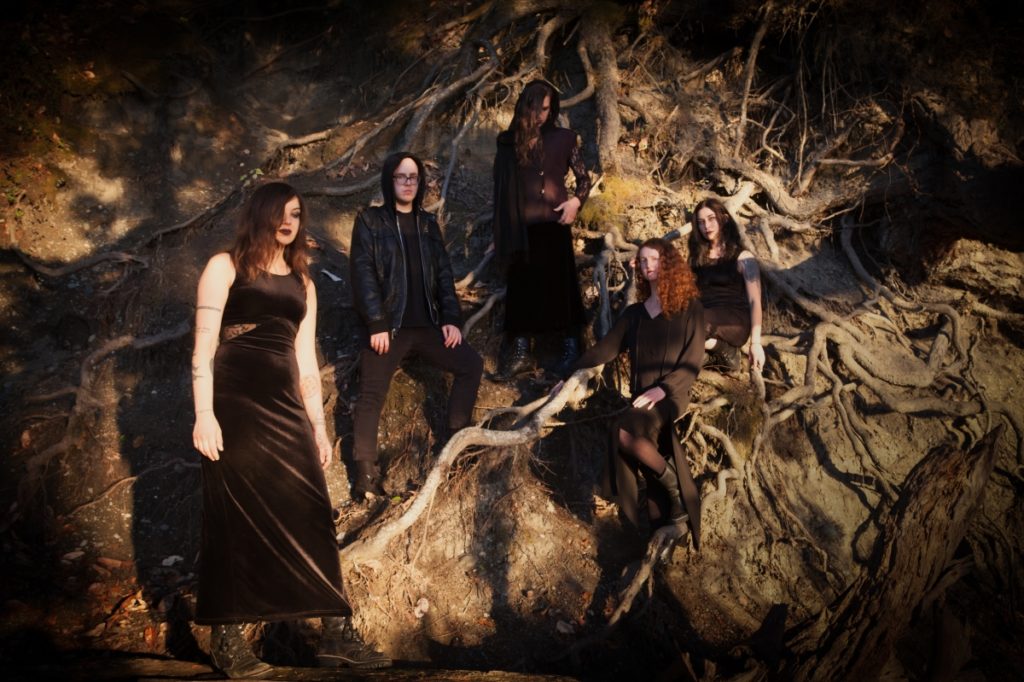 Maintaining the unique sensibility that delivered her latest project’s massive sound, Bekris incorporated that personal perspective into her work to a greater degree too, letting the depression she admits she’s struggled with in her life inform its colors.

After all, it’s thanks to the planet and our own personal drives’ combat that we’ve been left out in the cold at all. The cascade of issues that climate change represents falls atop our shoulders, and we ourselves end up crushed. These are personal issues… and perhaps dissociation forms a bedrock to our very existence.

“I have long struggled with depression and there is some everyday dissonance I experience within myself living in this modern society,” Bekris says. “Especially being from the United States and participating in a capitalist system that exploits people and nature mercilessly for the sake of profit. There is a general feeling of hopelessness I feel at all times. I dream of civilization collapsing and humans dying off and nature reclaiming the earth.  But also being a human and loving other humans it depresses me knowing that this would cause a lot of suffering. So I started writing songs around this concept, imagining if everyone I loved was dying around me. I envisioned what the earth would look like and how people would die.”

There’s little catharsis in this concept, and neither is there much of a respite in Vouna’s music. The songs attach themselves to the waves of turmoil already hitting us and deliver a punching, miserable doom sound.

She worked on constructing her sound through an array of projects, including outfits known as Eigenlicht and Vradiazei. A “rare Italian digital synth from the 90s, specifically made for Middle Eastern music” sparked the fire of her solo work after it had simmered behind the scenes over the years. As she explains it: “I’d played in plenty of bands with synth players but never owned one myself and I found it completely addicting.”

“I learned about this synth by looking at live videos of musicians in Greece, and I searched online and eventually found it,” she explains of the core instrument behind Vouna. “When I got the synth it totally changed my life. I’m obsessed with synthesizers now. I’ve gotten a couple more and I am learning how to use analog synths too.”

Check out Vouna via Bandcamp.