You don’t get much more direct than Wristmeetrazor. As the band’s name suggests, to say there’s no beating around the bush here would be an understatement. Besides the provocative imagery, the violent screamo band’s music feels like it’s lurching right out of their debut full length Misery Never Forgets and barreling straight for the listener. There’s an inescapable caustic feel to the record, like taking a bath in acid.

For some people, that works. The volatile state of their music reflects some of the artistic drives vocalist and bassist Justin Fornof shares as behind his new record, but not only in the sense that he’s using it as an outlet. He also hopes to connect with people through his songs — and indeed, in their very nature they jump right past many of the barriers often in place to personal connection.

“I think one of the largest aspects that we factor in is the relatability of it to other people,” Fornof explains. “I can say without question that as individuals, we feel very much like the things in our head aren’t necessarily the most relatable things, but the music is something that’s going to be relatable to people. Me personally, I like the entertainment value of it as well. I like to put words together that seem to be entertaining — something you’ll seek out, something you’ll be interested in aesthetically — but also something that’s relatable to someone that might be feeling a similar way and can find something in the songs that they can relate to and hopefully take something from — and hopefully grow from. I think music is the escape, and it really should be. That’s what this band’s supposed to be. It’s just supposed to be the escape for whoever finds it and however they consume it.”

The means of that escape include intense live shows that Fornof feels help a great deal towards a full appreciation of his band’s body of work.

“The live shows are really important,” he says. “To me, it’s integral to understanding this band on an intimate level or understanding us as people — seeing how intensely a lot of these songs affect us. We’ve been playing a couple of the new songs that are off the new record live that I wrote all the lyrics too, and I feel like they translate live in such a different and more intense and emotional way than even you could tell on the record in my opinion.”

Along these lines, they’re rather conscious with their sound, even to the point of overcoming the fact that none of them live in the same place.

That distance obstacle is hardly all they’ve overcome, though, as the band’s themes might suggest. Ultimately, Fornof explains, “The music just kind of comes from our lives. We just kind of put a soundtrack to how we feel. It’s weird to say it in those terms because it seems so simple, but I feel like in a lot of ways, it just is an outward projection of how I think we all feel.”

They’re understanding of those who might dissent from their own takes — but it’s their work, and they’re prepared to keep forging on and connecting with people through their artistic endeavors anyway.

“As a band, we’ve been a part of various controversies based on our name and some of our lyrics and some of our imagery and things like that,” Fornof notes. “Ultimately, why I think it’s important is not only does it give a very cathartic outlet to people that feel in a similar way, but it also makes an indelible mark on a scene that sometimes feels like it’s a bit scared to go this far.”

When it comes to alternative heavy music, there’s a lengthy list of bands who have dipped their toes into a pool of collective heartache without going too far in and discovering what the hell is actually in there. Fewer take the Wristmeetrazor path of “good horror” that The Witch director Robert Eggers described as “taking a look at what’s actually dark in humanity, instead of shining a quick flashlight on it and running away giggling.”

Fornof has a stake in this process. “For me, it’s just very real and it’s an unfiltered feed,” he explains of Misery Never Forgets, which he describes as “a stream of consciousness straight from me that I hope is relatable in some way.”

“I think the true excitement that we get out of it is where we’re going to go from here and how we’re going to continue to evolve the ideas that we have,” the vocalist adds. “We’re all very creative. All three of us have an unlimited number of ideas of what we want to do.”

Misery Never Forgets releases January 18 on Prosthetic Records. Wristmeetrazor will be touring in support of the record throughout January and beyond. 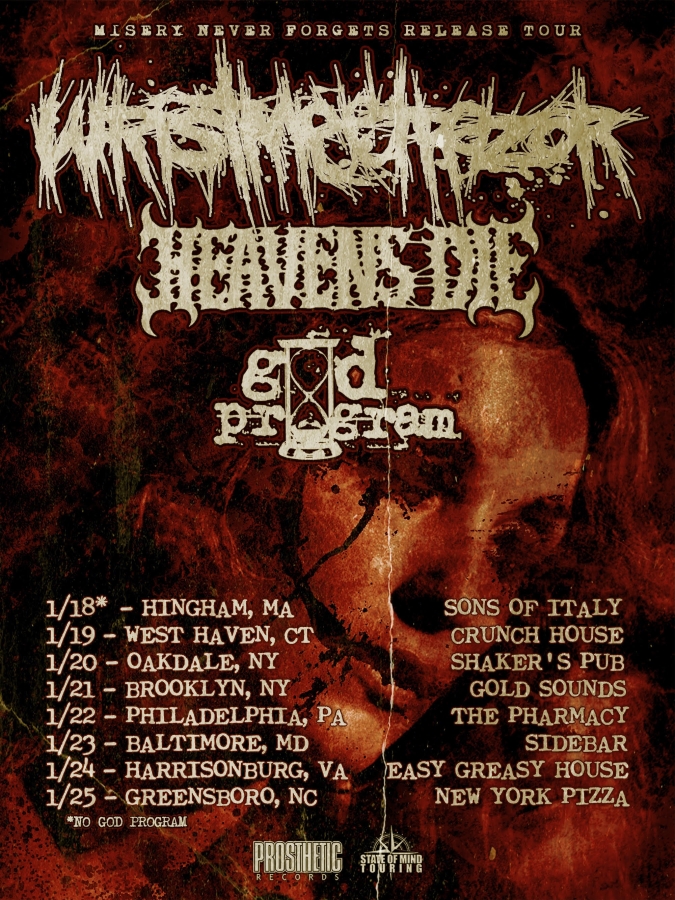