The latest album from the Atlanta-area band Malevich feels absolutely agonizing, and it’s perfect. Called Our Hollow, the album lands with the fury of something like a manic hurricane concentrated into a singular onslaught — it’s like a musical fire hose that reaches to some of the absolute outer limits. The band rocket past genre, stylistic notions, and much else and deliver an emotionally captivating portrait of real world equivalents of these meltdowns that they’ve captured.

If you can think of an extreme metal genre, it probably makes an appearance here. The band veer from a black metal cacophony into gritty grind into tense atmosphere and back all the way across the spectrum with remarkable smoothness considering the overall violence of their music. The dynamics that Malevich include help ensure that this music really lands. In a sense, you have to pay attention. It’s extremely difficult to miss the music’s powerfully paradigm-shattering and rearranging impact thanks to the sheer force of not just the heaviness but the entire mixture of disparate elements that the band have packed in here. Malevich sound completely free artistically, and the result proves captivatingly dark.

Indeed — for all the at times blinding intensity of this album and the wonderfully mind boggling, focused range of the manic musical attack, Our Hollow feels somber. That’s not just because of the lyrics, although those land powerfully too. Available on the band’s Bandcamp profile, they chronicle boiling rage at developments like getting “burned alive as fuel” in the “meaningless factories.” Going on from the lyrics, the entire album feels remarkably emotionally and overall musically grounded.

Throughout Our Hollow, no matter what precise style the band are employing, Malevich return time and time again to a thrillingly pulsating tension delivered with a caustic enough force to only barely metaphorically rip faces off. Ultimately, the album feels like the legitimate call out of someone who’s felt crushed by the march of the societal machine that has enacted some of the most dangerous conditions of the present social and political climate. Considering the scope of those dangerous conditions and how many people they affect, Our Hollow feels like a desperate assertion of individuality completely ready to get behind.

The album’s official release date is October 25. Vinyl is available via Middle-Man Records, Fremen Death Commando Records, and Sludgelord Records, while cassette copies of the album are up for grabs via Dead Red Queen Records and Zegema Beach Records.

Catch the band on tour this fall: 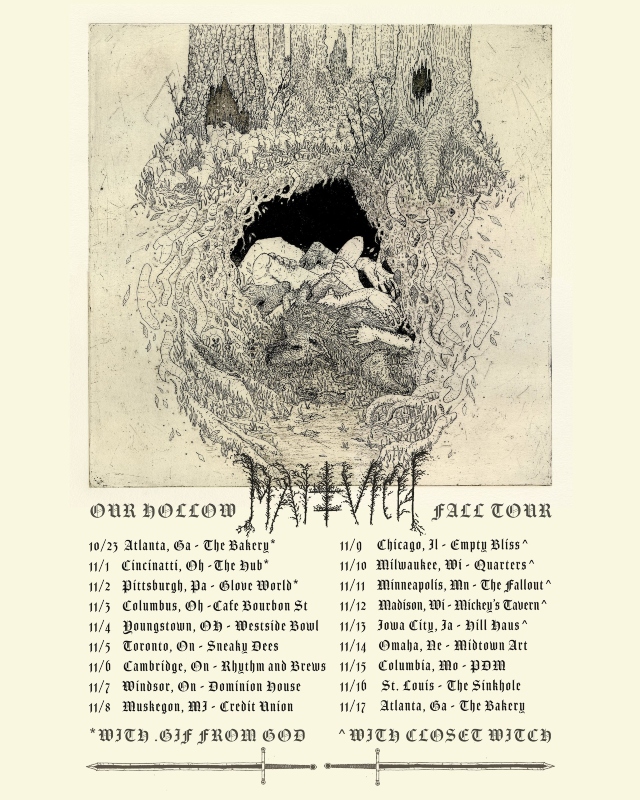