The Maltese post-rock group Eyes To Argus are preparing to release their illuminating new album In Habit in coming months via Post. Recordings.

Get a first listen below to the group’s blustery and subtly transcendent new single “Habitual”!

The song clocks in at around eight and a half minutes, and, structurally speaking, it’s largely rather free-flowing, thereby cultivating a particularly immersive and experiential atmosphere. Instead of a prominent verse-chorus-verse structure, it builds and builds.

The track, which opens with (among other elements) glistening bubbles of warmly bright synths, feels like immersing in some celestial pool with healing qualities.

The instrumentation steadily grows in intensity across the song’s runtime, but it’s always peaceful and mostly relatively mellow. Although the growth is there, the meditatively paced yet grandiosely emotive track is breathable to the point that it’s not particularly crescendo-centric. Instead, it spotlights its journey and seems secure, no matter what lies at the end.

Dynamic flourishes on the poignant track include basslines within the first segment that feel somewhat danceable, like swaying along in the quiet wind, and on from there, the instrumentation gets a bit heavier and more dramatic around the mid-point, with relatively meaty guitars and passionate drums. The track eases up again ahead of the conclusion, but throughout the whole venture, the music remains intricately propulsive.

With its relatively consistent push forward and crisp emotional resonance, the track lands like the sound of grounded ambition, and it’s quite refreshing, like a splash of chilly water. The song’s cloudy whimsy seems particularly accessible thanks to the melodic strength and relatively unencumbered sound. It’s billowing, but not unwieldy — instead, the track appears personal, like a solitary journey through some strangely unfamiliar yet decidedly promising environment. The song feels like it brings a bit of the cosmos down to earth.

Keep up with the group on Bandcamp at this link.

Listen below! (If there’s an issue with displaying the music, please refresh the page and/ or wait a moment.)

Eyes To Argus share the following message about their new track:

“‘Habitual’ was a natural choice to be the first single from our new album in habit. Every song on this album represents a room or form of domestic space in a house. ‘Habitual’ represents the study, although what this really means is any room that you feel is your creative space.

The song is about facing your dependency on comfort zones and familiarity. Routine and habits are a double-edged sword. They are a security net, but they can also make it hard to explore unfamiliar territory. It’s something that we carry with us in our daily life, but the song is especially relevant to the struggle we felt somewhat when we started to write in habit.

This is our second album, and we wanted to evolve our sound without departing too far from who we are. It’s not always easy to find the confidence to chase new inspirations at the risk of becoming a ‘different’ band. But in the end, the process of writing these songs has been an incredibly rewarding experience.

Samwel, who sings on the track, was inspired by the theory of the rhizome when he wrote the lyrics. Without getting too much into it, the rhizome is a way of viewing creative output as a series of interconnected roots and routes. It resonated with us and our desire to create connection points between our current identity as a band and the new sonic directions we wanted to take.

In that sense, ‘Habitual’ is a kind of blueprint for in habit, so we think it’s really apt that it ended up being the first track on the album.

The artwork for “Habitual” was created by Sam Falzon (Bainmarie). We collaborated with six visual artists to create a unique artwork for each song off the album. We asked them not to interpret the song lyrics. Instead, we wanted them to capture their own relationships with the domestic spaces they were representing.”

Check out the single art for “Habitual,” as created by Sam Falzon, below: 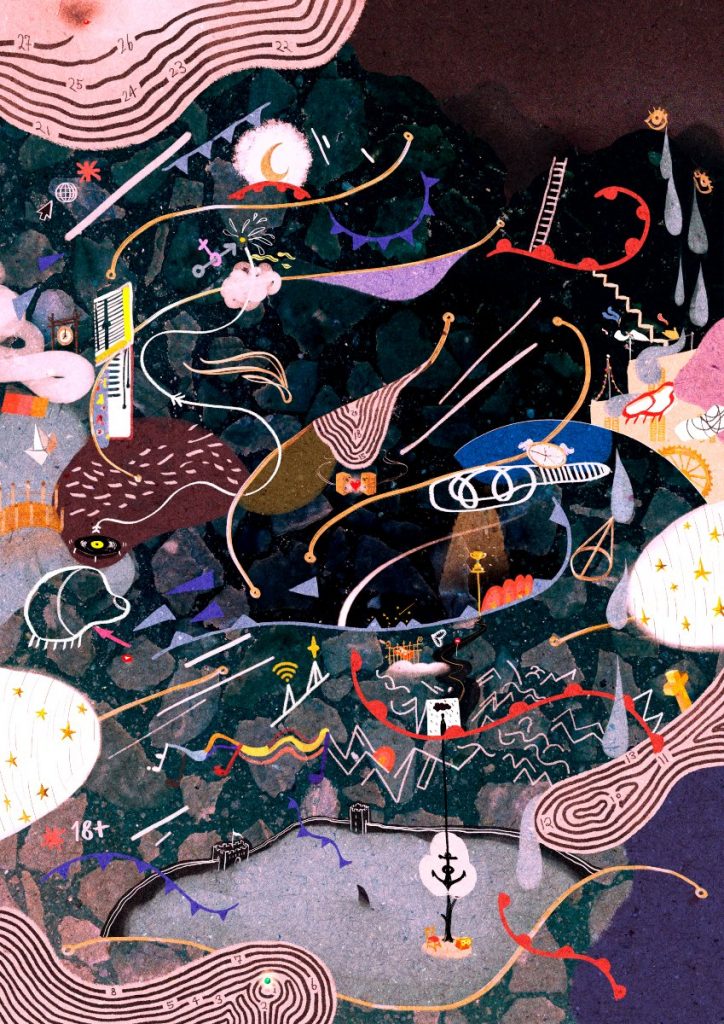