Our Future Is An Absolute Shadow is a fierce new screamo/ noisy hardcore project featuring Dave of Zegema Beach Records, мятеж, Apostles Of Eris, & more; Jesse of Majorel, In Wolves Clothing, & more; and Adrian of Old Soul, Cloud Rat, & more. The ferocious trio’s debut collection of songs is slated to drop in full on Tuesday, September 15, via Zegema Beach Records, who will also have tape editions of the record go up for sale on that day. Get a first listen below to the group’s fiery new single “Alternate Ending”!

The single seems to musically capture an experience of unsettling unease ominously growing in the corner’s of one’s psyche. All of the elements of the song, from the drums to the guitars to the vocals, feel pummeling, and they carry a scorching ferocity that pushes the song forward. The searing guitar riffs and gut-rattling drum rhythms throughout the earliest parts of the song feel like licks of flames rising towards the sky — it’s a powerful musical inferno.

On a sound level, the song kicks off with a frenzy and carries a lot of technical intricacy amidst its avalanche of heaviness. After about 30 seconds, the track gets (comparatively) somewhat slower and sludgier (without losing any of its internal drive), and at the about one-minute mark, the song shifts sludgier again. As the song proceeds and builds up into the simmering conclusion, the listening experience feels like collapsing under the weight of an avalanche and/or surveying the wreckage of some kind of monstrous blaze. It’s a striking musical exploration of some solemnly looming  extremes.

Listen to the new single below!

Dave Norman, who is the project’s lyricist and one of its vocalists, has explained the following about the song: “A few times in my life I’ve been outside in the wilderness only to have crippling anxiety attacks where I became convinced that a bear/cougar/something was very close to me and I was in grave danger. Not a lot…like three times over a span eclipsing 30 years. So on Nov 19th, 2019 at about midnight I was cleaning out my cat’s litter box on the bottom level of our house. I heard a bang, followed by a big crash.”

As it turned out, there was a bear. He adds: “It was as I put my hand on the door handle that a bear walked in front of my door (about 2 meters/6 feet away) a second before I opened it. I generally just walk outside without thinking and round the corner swiftly to take out the garbage. After processing what I just witnessed, I stopped turning the handle, locked the door and backed away. Less than an hour later I began to go into mild shock and became convinced that in an alternate universe/reality I opened the door and after mauling me, the bear killed my entire family who were sleeping upstairs. I quickly painted a picture that I titled ‘Alternate Ending.'”

That painting is cover art for the single — it’s the background in the video featured above. Alongside Dave’s lyrical and vocal contributions, Adrian handled drums, and Jesse handled guitar and bass. Adrian also added vocals, mixed in some field recordings that he and Dave had captured, and did mastering.

When tapes go up for sale, here’s some of what you’ll be able to get! Three variants will be available. Follow Zegema Beach Records on Bandcamp at this link to be sure to catch the drop. 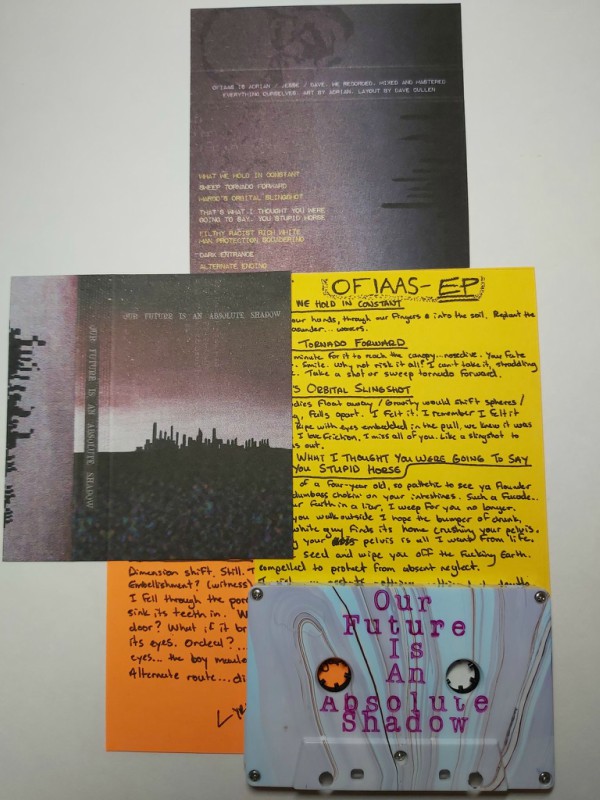